How I Conquered South Africa in 8 Days: JOHANNESBURG

After a long night filled with dancing, making new friends, and a continuous flow of drinks, I'd arrived in Joburg feeling like last night. Intoxication had reached an all new level, and I was in need of recovery. Cape Town, indeed, showed me a good time.

Looking forward to my last leg of the trip, we head to our hotel to check in.

The Protea Hotel line is a part of the Marriott family. This popular South African hotel line has various hotels in every city I've visited. I’d read great reviews and figured with such popularity; I would try it out. Needless to say, I could’ve skipped the experience. The room was dainty, and the ambiance in the Hotel bar and restaurant was dim yet provocative.

I could've done without the service at this location. It was only one person I liked and every time she helped us; it was a 10. All the other times, it was as if trying to do your job was harder than just doing it. They even had the nerve to charge us to call our tour guide who’d been calling the hotel all day to coordinate pick up. I guess it was too much to look up a name I suppose, but I digress.

On the brighter side, having security around made me feel exclusive yet protected. The way they move around you’d think you were a celebrity. They had the earpiece and all black suits. I mean… we were in Melrose (Arch). I asked around, and people say it’s a rather wealthy neighborhood. So, I guess you can say they were playing the part.

Anywho… I believe the Protea brand as a whole is very pleasant and upscale, but I picked the wrong one.

Recovery was real! The older you get, the longer it takes to recover. As much as I wanted to enjoy the day, I couldn’t leave the room to save my life. And when I came back to life I was starving and went to the hotel restaurant to enjoy a burger, chips (fries), and my alcoholic milkshake. The alcoholic milkshakes and chips (fries) were superb. I had my fill of chips and coke. The coke in South Africa tasted much better than the US.

Up early and ready to face the animals, our tour guide picked us up, and we were off to the Lion Park. At the Lion Park, they took us on a mini Safari ride to see the animals they have on the grounds. We got to meet the friendly giraffe, Betty, see the different lions and hyenas, wild dogs, zebras, ostrich, and more. It was a lot to take in and definitely not expected from the Safari.

Afterward, we went to pet the cheetah and lion cub. The cheetah was just sitting there… coolin. I was a little nervous because while you pet the cheetah, it made a growling sound and all I could think was there goes my hand! But they assured me we would be okay. They said he makes that noise because he’s enjoying it. Suuuurrreeee he does! As I kept a close eye, we continued to pet and pose as they snapped away to capture all the moments.

Now the lion cub was another story! Of course, I’m the last one because I want to get ALLL the pictures, but it seemed not to work out so great. Well, when the man told me to lean over the lion for a picture, my scarf touched the lion’s head, and he got up. I guess that was my warning because when the man told me to sit beside him, he got up again and tried to pounce on me. I swear to Moses when I say I had an out of body experience!! See... My soul was soo moved that it left my body and scurried behind the handler! It took my body about 5.8 seconds to realize what just happened and caught up. Lil Simba had me messed up!

Once the handler got him to calm down, he called me back over to finish up. The lion cub finally cooperated and even let me hold its paw. A few more snaps and I was up and out.

Elephant and Monkey Sanctuary The Elephant and Monkey Sanctuary was two parks in one. All the animals in the park were all rescued from other places, were abandon, former pets, or abused. At the elephant sanctuary, we got to feed, pet, walk, and ride the elephants. They even gave people kisses (I opted out of that experience due to unwanted dirt and elephant slob on my face)! Once you got over the offensive smell of elephant shit and swatting swarms of flies out of your face, I would say I enjoyed walking the elephants the most.

Entering the Monkey Sanctuary, we were greeted by Mr. T. Mr. T for some reason thought it was ok just to climb up on my head. After a few pictures, he spied another tourist water bottle and tried to steal it from her. She thought it was cool to feed the monkeys… until they swarmed around her.

As we continued along the path and saw the different monkey species, the guide educated us on which ones to stay away from and how most of them got there. It was like a mini adventure, crossing over moving wooden bridges to get to other sides to spot other animals. The guide also educated us on the different trees and how they were used to feed the animals or for medicinal use.

All in all, a very educational yet fulfilling day. I'm ready to conquer Kruger and the Big 5 in my near future.

Sigh… It’s the last day in South Africa, and I am beyond depressed. I’d fell in love and didn’t want my time to end. Trying not to think of the inevitable, we packed up, checked out, and started our final tour in Soweto.

Soweto or South Western Townships is a famous black urban residential township in Joburg. Known for its history of apartheid and home of two well-known leaders, it is full of heritage sites, restaurants, and friendly, vibrant people. The people were so friendly that while walking down the street to visit Nelson Mandela house, a little boy walking by waved hello before smacking me on my ass! In pure shocked, I gasped and quickly turned around to address the little boy. He giggled, blew a kiss and ran down the street. All the neighborhood guys on the stoop laughed.

Before visiting Nelson Mandela’s house, we enjoyed a buffet lunch full of South African delights. This lunch was my first time getting a chance to eat real South African dishes. A lot of foods are no different than what I have at home, just different seasonings and sauces. I enjoyed the chicken, sausages, and most side dishes like the rice, beans, and pasta. I could do without the pap and lamb. It’s an acquired taste that I gladly lack. As we ate, we watched the local street acts perform and hustle tourist out of money. It was quite amusing actually.

Bellies full, we finish up and prepare to leave. Before departure, the manager stopped us because he wanted to ensure we enjoyed our meal. Once he learned we were American, he quickly dove into politics to address his concerns for our candidate choices. He stated that many countries looked up to America and didn’t understand how we let this happen. Being that he wasn’t the first person to address this topic with me during the trip, I began to realize what power the US possesses.

After saying our goodbyes, we walked next door to Desmond Tutu home. It’s not open to the public, so we just took a picture with the plaque recognizing his home. We then walked down the street to Nelson Mandela House for our tour.

During the tour, our guide described the home and what all transpired during the time the house was occupied by the Mandela’s. It was scary to see the bullet holes from people shooting at the home trying to kill Mandela. Inside the home, we found replicas of some of the furniture and precious treasures the Mandela family held.

Apartheid Museum Now this museum is definitely a must see. It is full of soo much history that I need to go back to finish the rest. It would shift your mood seeing that their stories are not too far off from what blacks dealt with during slavery time. And the fact that segregation is still very much prevalent in their communities shows that even though they have come a far way, they have much more to go.

Before we entered, we received a card. It said “whites” or “non-whites.” We entered through different doors and saw duplicates of people’s identification cards that fell in those respective categories. We then met back up to go onto the main floor where they went into much detail with all types of visuals of Mandela and his involvement and explicit details of apartheid.

I didn’t get to visit and explore all the rooms, but I definitely plan to go back and devote more time.

After the museum, we were rushed to the airport to make sure we made it in enough time to catch our flight. Anthony, our guide, was hand down the most attentive and accommodating guide I’d ever had. He adjusted our itinerary to make sure we were able to take advantage of all we could while in Joburg. I’d definitely recommend him to anyone.

Arts on Main- Also known as Maboneng Precinct, shuts down part of the street on Sunday and has a big market. You can find all types of things from trinkets to clothes. They also have art on display and music playing. Some just go and enjoy the scene others go and shop for rare finds.

*** Liked what you read and what a South African adventure of your own? Check out my ‘Help Me Travel’ page. I provide travel consulting services and can help you make that adventure come true. Want to go, but not by yourself? No worries! I’m planning a group trip to South Africa next year! Get updates on group trips by becoming a TravelBug! I’ll be announcing the upcoming dates soon! 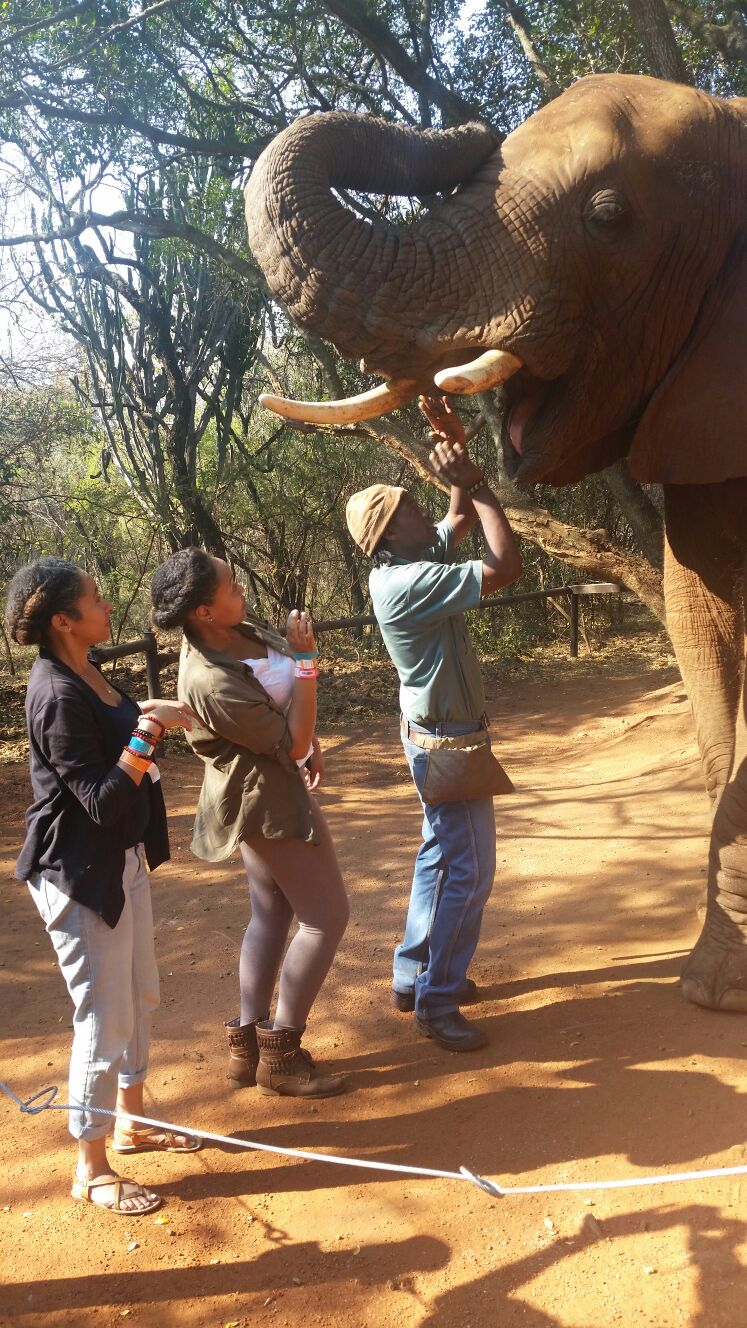 How To Plan A 3-Day Itinerary Trip

Jamaica And The Land Of The Winstons